Back in August my son and I took a drive up to Panama City Beach for a friendly Tournament. Getting out of Florida always seems like it takes for ever specially when you have to drive through unfamiliar back roads and ghost town look a like places. On the way we almost hit a dog and some deer that seem to appear on the road like holograms in the foggy night.  Scarier thing is to stop at a gas station and been asked “you lost? You ain’t from around here ha?” I have to thank to that darn GPS for always taking me in the back roads and neighborhoods with 1 pump gas stations.  Well, once we got off the I-10 highway it was a dark ride all the way to Panama City Beach but we got there in one piece.  As we arrived at the hotel we went to get some subs and a drink then shortly after we went straight to the hotel and prepared for an all day of vertical jigging. My plan was to start with a long jig for AJ and then to use the slow jigging method combined with what I refer to as Yo-Yo technique (not Yo-Yo California Style; drop, reel fast, drop again, repeat). Simply drop the jig to the bottom and slowly pump it up and down. Then after a few up and downs slowly pump and reel, pump and reel in a slow manner.

It was morning time, we got some breakfast and then we had to hunt down for the Marina’s location. Once there we loaded the boat with our long list of gear and a couple bags of ice. The boat left at high speed to the fishing grounds just to find another team fishing the same wreck we were going to fish as our Captain positioned the boat we heard a shout saying that we were already fishing for second place as they had caught a big Amber Jack.  We thought they were joking so we began to fish the other side of the wreck where a small jack was caught but nothing else was interested in our Metal Vertical Jjigs. 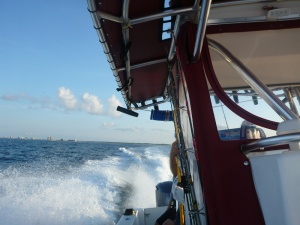 We moved to a second spot where the action was hot from the start it was an all out Porgie (White Snappers) madness by the guys. Below is the first Porgie on the boat, this one was by Ray. 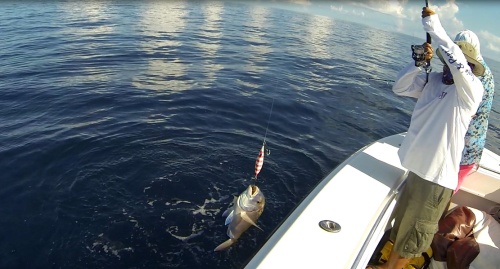 Here is Jeff and the second Porgie on the boat. In total there were 7 porgies caught and most were from this stop. 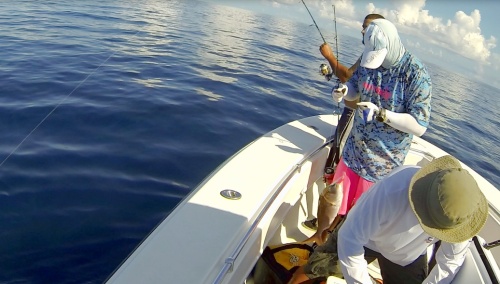 Finally on the third spot red grouper after red grouper started coming up, but for me it was slow as I was the only one with a long jig in pursuit for a big AJ. After seeing that my jig did not produce on the first two spots I changed it to a smaller length H4L Goober 300g and finally started to catch them groupers and in between them there were several Red Snappers and a couple of  Bonitos caught.

Below is Captain Charlie helping Ray with his Red Grouper. He was using a Jigging World JW-A141 170g Vertical Jig. 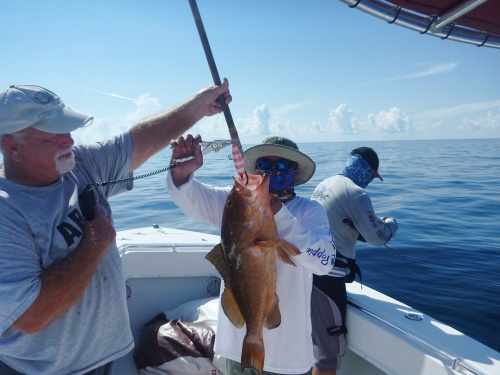 Here is Jeff and the biggest grouper of the tournament. A 19 pounds Gag Grouper. 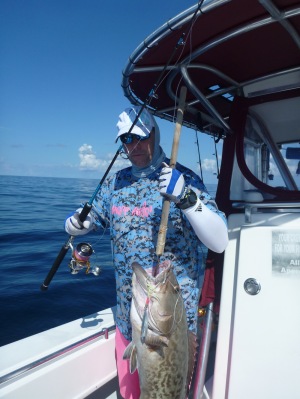 Rey with another Red Grouper. 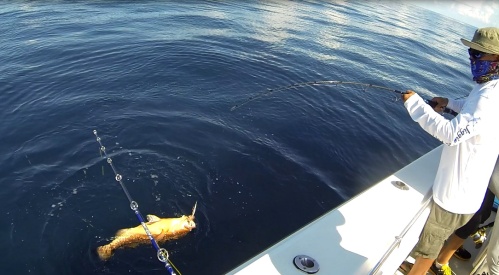 Below is a double with a Red Grouper by Ray and a Scamp by me. 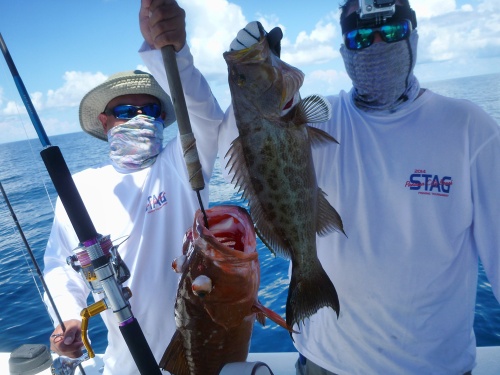 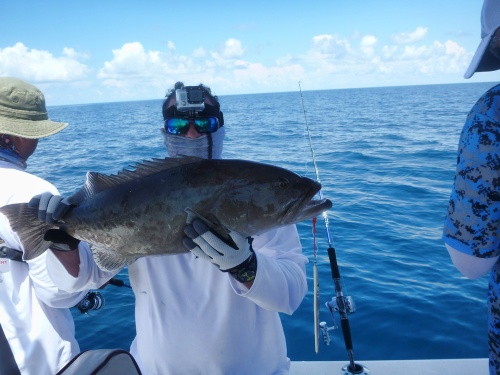 Red Snappers also liked my jig, but most of this one was taken by the tax man in the Grey Suit (a shark). 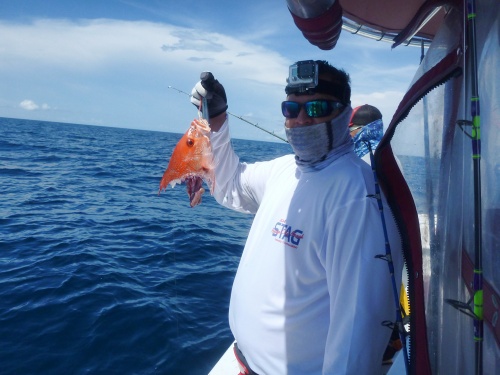 Here is James with some bendo action. 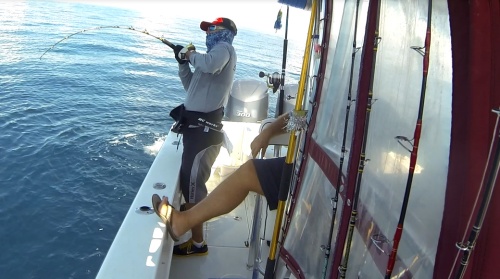 After the Grouper and ARS mayhem things slowed down a bit, then my son was able to nail an Lesser Amberjack. 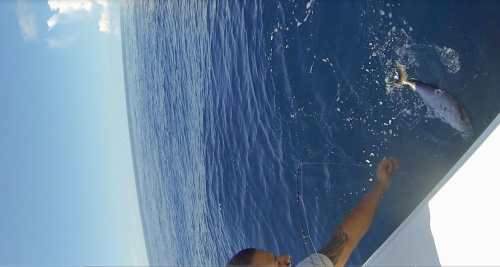 There were lots of American Red Snappers caught on our boat. Below is Ray and in the back you can see  James with another one. 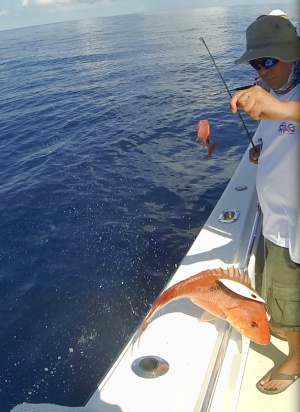 Here I am with another ARS as well. 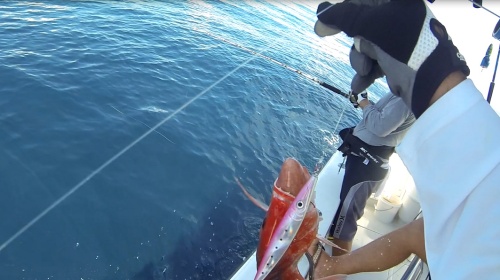 Then my last Scamp Grouper came in. I caught 3 Scamps and a Gag on this trip. 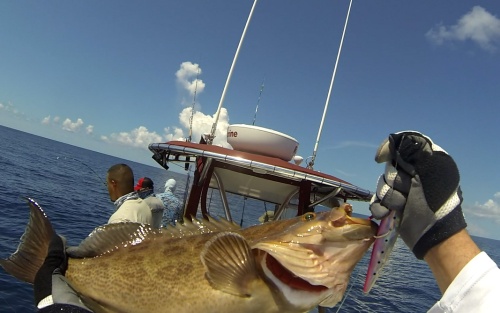 After that scamp we had a 5 consecutive hook up. Here are three bent rods on this pic. It ended being a mix of groupers, American Red Snappers, and a Bonito. 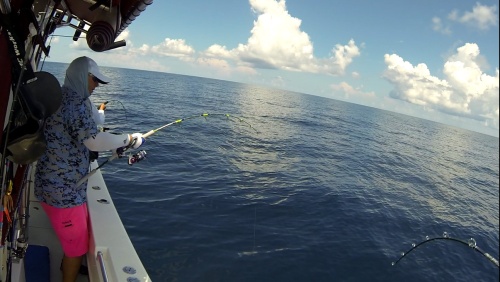 This spot has an all out mix of fish. Here is my son with a Porgie. He was catching all his fish on an 80g Maxel Dragonfly. 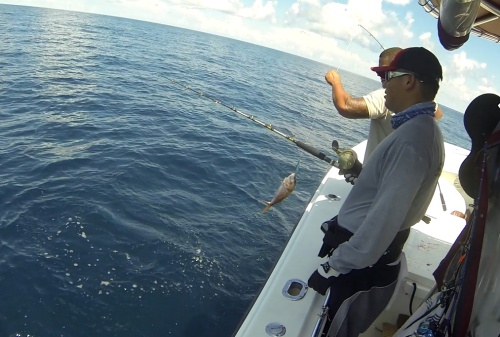 Then he managed to get an Amber Jack on the same small jig on a different spot. 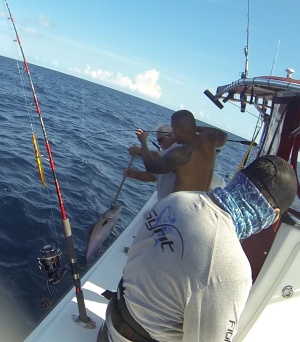 That was it for us it was getting late, we had a box full of fish and most of us had our grouper limit for the day so we called it the day and headed home. 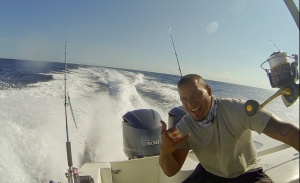 Back at the dock we tallied our fish and took a quick picture. The total came out to 27 fish caught between 5 of us. 6 Red Groupers, 8 Scamp Groupers,2 Gag Groupers,7 Porgies, and 4 Almaco Jacks. We waited for the other teams to show us their catch but one of the boats had bad luck with the weather in the area where they went and turned back a lot earlier than we all expected. The second boat showed up with a 70 pound Amberjack, an 18 pound grouper, lots of peanut dolphins, and some Vermillion Snappers taking the winnings since they caught the biggest fish and Pelagics plus Snappers. 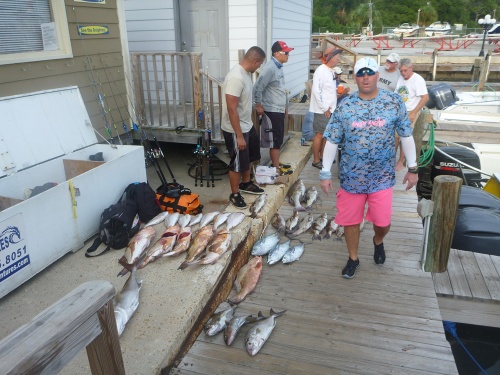 It was the end of the trip and we all got together to share some stories before we headed home. Below is a group shot, but the camera flash did not work properly so it didn’t come out correctly. We stayed for a little while before heading home for our 10+ hour drive. It was plenty fun and the fishing in Panama City Beach seemed well worth the stop for a future trip. 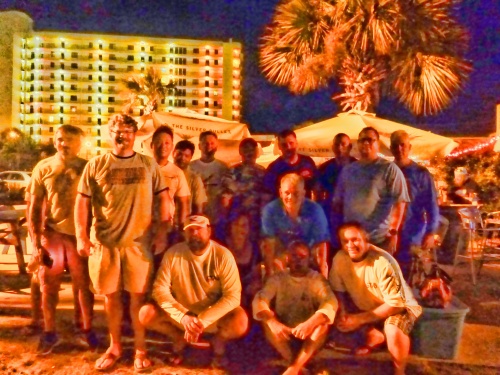 Below is a link to a video of this trip.

Hope you all enjoyed and perhaps it helped someone with some Vertical Jigging information.