I was invited to go fishing on a trip to the Dry Tortugas. I was asked to replace a fisherman that was not able to make the trip so I jumped in. Many times you arrange a trip in advance things come up and people can’t make it. I was in their shoes as well looking for a replacement but ended going fishing as I was able to resolve my plans. On this trip my goal was to test my back and jig as much as I could. I’m glad I’m able to enjoy jigging a lot more now. I jigged the first two days and had to rest on the third, but I made it.

We left the docks around 9:30 pm and got to the fishing grounds around 12:30 am. On the first stop the current was fairly strong, Rory was able to get a pig of a mutton snapper but then shortly after it turned into a sharknado. No matter what you would put down it was shark after shark. Morning time came and current was still fairly strong. I was able to use 220 grams slow pitch jigs hooking up to several American Red Snappers and small mutton snappers. Then things got a bit better and was able to land a nice Scamp Grouper then again we were hit by another sharknado and ended up moving away as they were even hitting our jigs making us loose several of them until I added some flexible Tyger wire. This is a pretty good wire that is very hard to kink and is so flexible that almost acts like heavy mono filament and you can tie knots with it making it very easy to handle.

Below is Rory with his nice Dry Tortugas mutton Snapper. 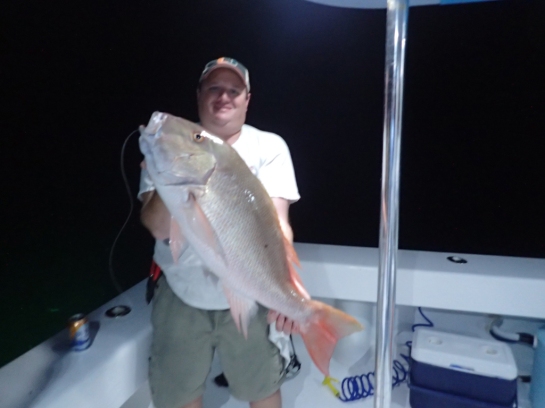 One of my American Red Snappers.

The sharks started hitting the jigs. 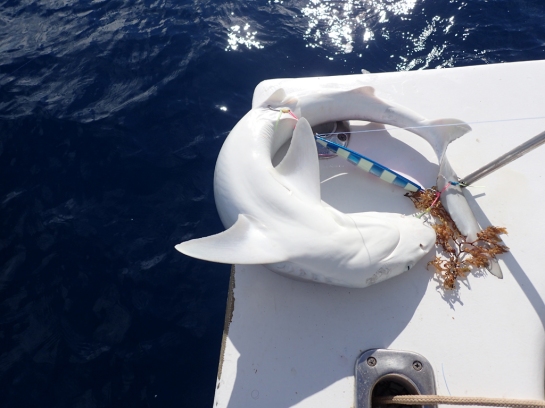 My scamp grouper below was caught with a slow pitch jig . 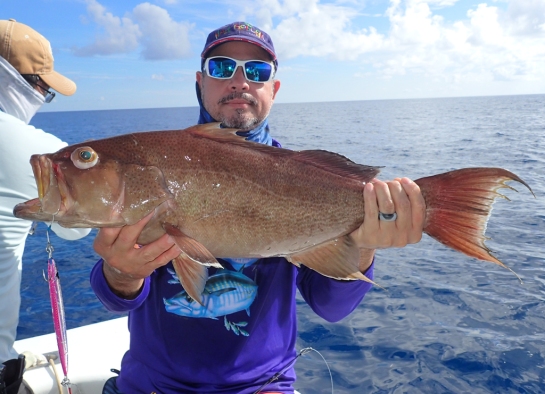 Rory getting ready to release an American Red Snapper.

Bill and his American Red Snapper.

Having moved only a few minutes away it was donkey kong time! Ben was able to land a 70 pound class amber jack with the help of Rodney the rod holder. I was able to somehow get away from them and landed another scamp grouper. Fishing hadn’t been as good as we wanted and so the Captain suggested we do some deep drop fishing and out came the electrics but me and Jongsoo tried jigging with 500 gram jigs anyways and was able to get down successfully only to get tangled with the electric reel lines as the Captain kept trying to stay on the spot by power motoring. We decided to get a rest and Jongsoo got in the electrics while I helped a few times bringing in the fish. I should have helped more, my apologies to the guys for that.

Ben and his Amber Jack that was released. The pic does not do justice on the real size of this fish.

Below is my second Scamp Grouper of the day. I got a total of 3 Scamps on the #slowpitchjig.

A sample of the deep drop fishing snowy groupers caught by Rory and Bill. 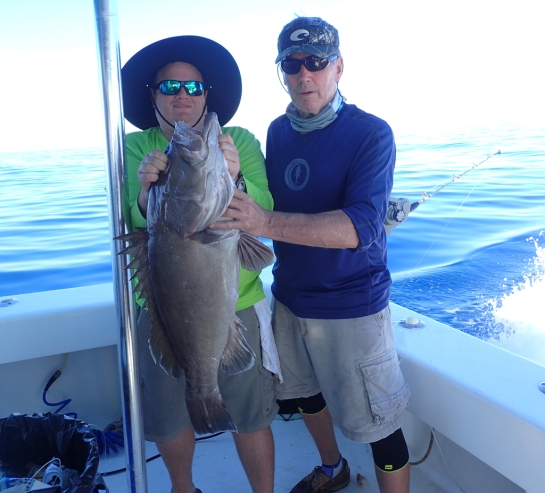 Sunset came and no black groupers, no mutton snapper just sharks and sharks and more sharks. We decided to just eat a nice dinner prepared by Captain Yuri then rest and went to sleep waking up at night to try again but the sharks were just too thick. Morning came and things went for the better. A few porgies were caught as well as a couple of red groupers. Rory’s dad Bill got some nice mutton snappers and Greg got his first ever mutton snapper and it was a pig of a fish. Way to get a first with a 12 to 14 pounder. I also got into some mutton snappers on the slow pitch jig. By this time it was already 3pm and the Captain decided to move.

Below is Jongsoo on a battle with a big shark. 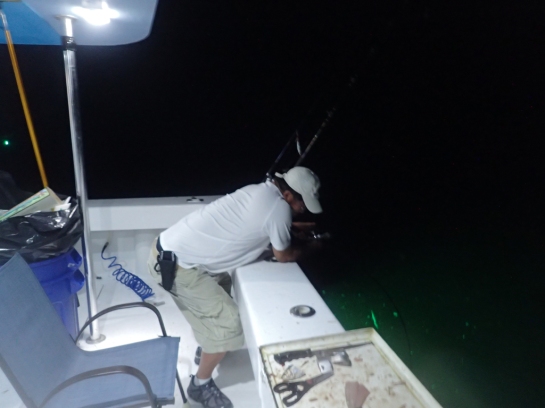 below is Jongsoo with a porgie caught on a slow pitch jig.

Then again a Red caught on another slow pitch jig. 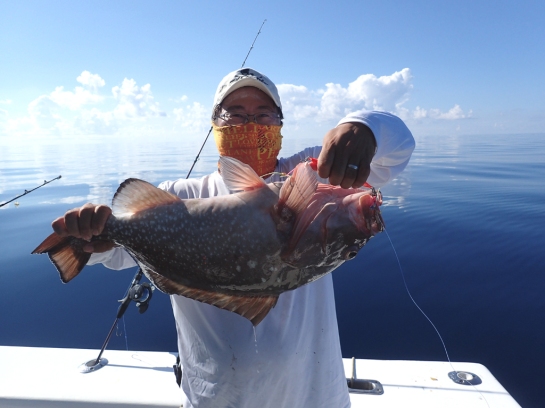 At this time of the day it was #slowpitchjigging time and worked nicely. Rory with a mutton snapper caught on the slowpitch jig.

And another mutton snapper caught by me on the slowpitch jigs. 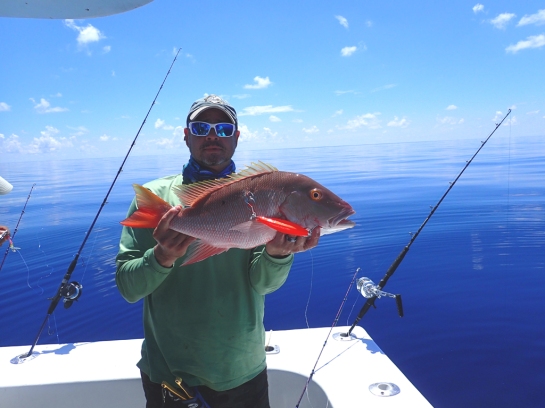 What I call a white grunt caught by Greg.

Below is Bill with another mutton snapper.

Rory with a nice porgie. 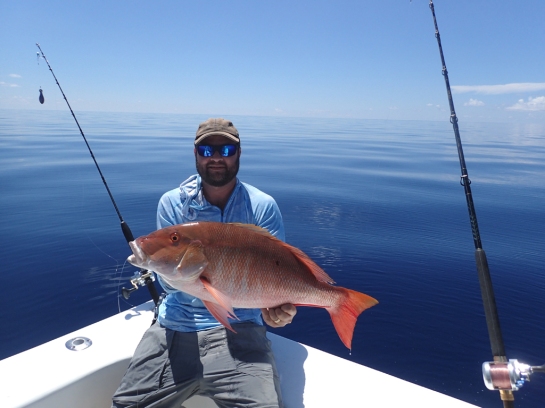 i also took a turn with a nice size Dry Tortugas mutton snapper.

Next spot was not so great we power drifted to keep vertical but all we hooked up again were sharks and re sharks. Sunset move was also not productive, no black groupers just more sharks and the rest of the night proved much of the same, sharknado! Jongsoo took the cake with a shark over 200 pounds or so.

Here is the nice cuda. 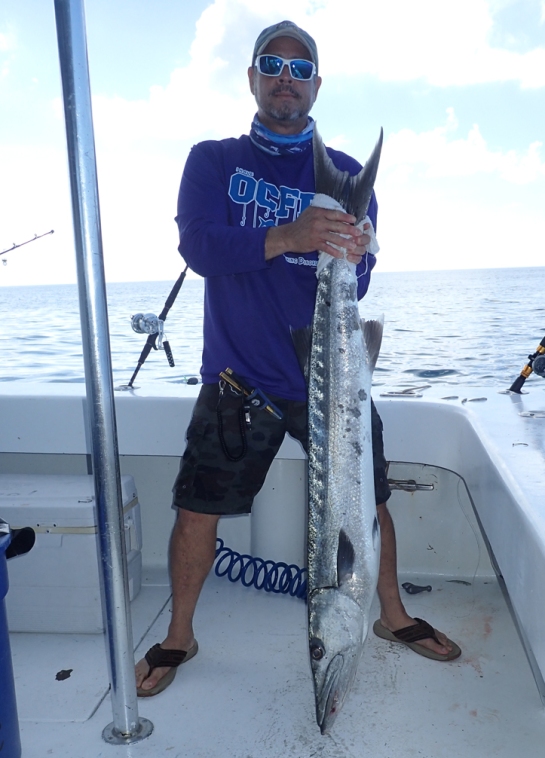 All in all it was a sharknado trip with slow catching and some quality fish in the mix. In the end we took dinner home for a few weeks if not a couple of months so this was an ok trip.

Below is me with two of the fish not in the above pics and the overall catch from the trip. 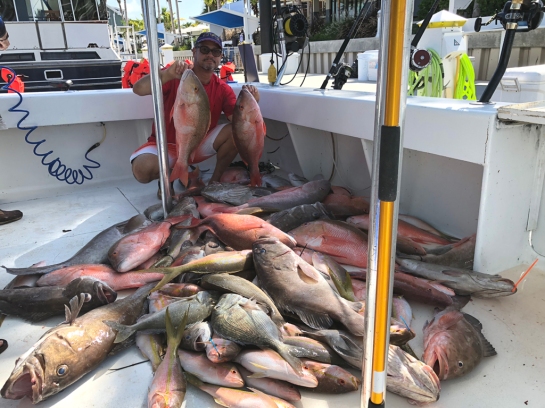 Until next time, Tight Lines!