It was that time of the year, we set out to go permit fishing, play with some tarpons and perhaps grab a few snappers for dinner at home. We wanted to go at night to play with the tarpons as these are easy to catch when not many boats are around. Tarpon usually hang around under the bridges in the shadow lines produced by the street light and the bridge itself. There was one problem, we forgot it was lobster season opener in Florida. This means that there were thousands of tourists who drove from who knows where to come and catch 6 lobsters per person. So you can imagine grandma, the grand kids, and the uncles all got a fishing license and camped up in a boat so that one of them would go down hunting for their lobsters. And so it was hell trying to fish with boats running all over and divers risking their life getting tangled with our lines. Many don’t understand that lobsters are anywhere and everywhere in the Keys. The key is to find a rocky area and bam! get your limit quick. But hey go buy a boat travel to the keys and fish under a bridge that you could have swam from land as well. I know there is lots of fun in doing this but better yet, just buy the lobsters at the local store it’s a lot cheaper as the matter of fact you can buy live lobsters at $12 bucks a piece from some markets in the keys. You don’t have to waste boat gas money, equipment money, or your life.

Below is a boater getting a few lobsters while bull netting, a quick and much easier way to getting lobsters and not have to dive down. You shine lights in the shallows and the lobsters stare at you like a deer, you place a net on top of them and they get tangled in the net. Easy as pie! 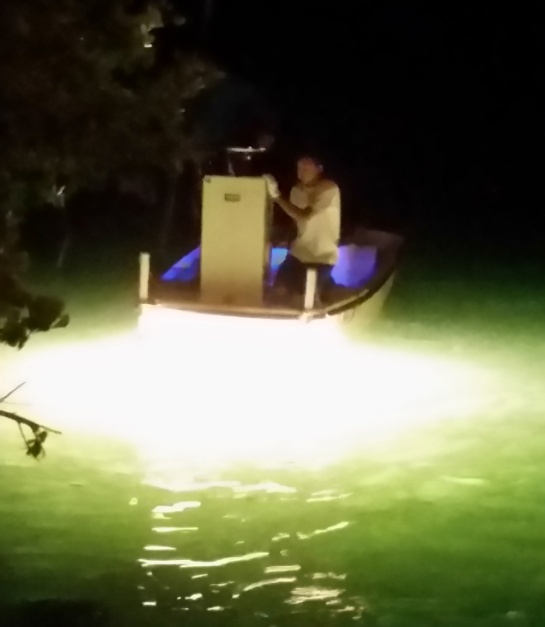 I enjoy boating my self but always let others enjoy their fishing where ever it is they are doing it. Well enough with the rant here is the outcome of our trip:

Since we had wasted our time trying to look for a bridge where there might not be so many boats we decided to end it and go try out and fish for the permit fish. We got to the bridge and on we went on to set up. Shortly after setting up I got a nice hit and lost my crab. then Jongsoo got a hit and ended being a bonnet head shark, we released it and found out what had  hit my line earlier. The night passed and early morning came I got another hit and run but lost it again, weird thing is my crab was in whole shape. Perhaps a tarpon sucked it and then let it go. Time passed slowly and windy when around 6am I got another hit but I had fallen asleep so took me a bit to get my rod, LOL. Well, I got to my rod a bit late so I was already wrapped around a pylon. I ended loosing this fish.

Retribution! Nilson was next. I looked at his rod and it was shaking I screamed Nilson you are getting hit! Sure enough it was a click click and no run, Nilson picked it up, reeled a few times and the fish ran and it gave him hell. It went under the pylons in the middle of the bridge footings. He pulled the permit fish out very slowly and then brought it to the arches to land it. We had problems with the current and getting the net under the fish. I passed the net to Jongsoo but he ended up getting tangled with the hook on the fish, unfortunately the net was ontop of the fish. It was caught on the hooks that were on the fish mouth. yes, it had two previous hooks in it’s mouth. Jongsoo tried to get the fish tail with a jig, he would then try to flip it into the net but that plan failed as well as he ended getting tangled in the net as well.  In the end I proposed to take a risk and hand line the net slowly but surely until the fish was within our reach. It worked! We flipped the fish and it was all high fives around. it had my hook, it was the same fish I had lost.

Here is Nilson and his fish. 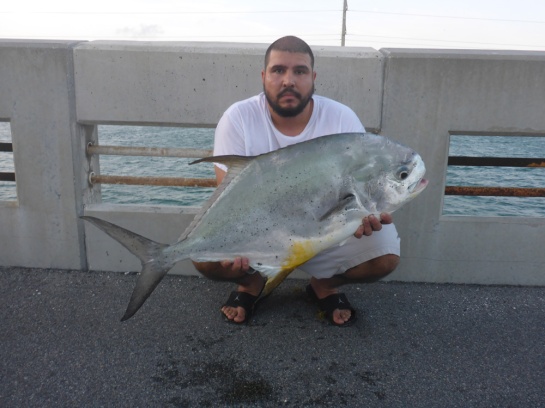 The day went on and all bites were the same, the fish were just sitting there with the crabs in their mouth. Jonsoo lost a couple and then the bite died. We ran out of bait so we went to get pin fish, but to our bad luck the flats were full of Bermuda chubs and small snappers. So we decided to go on a bait run. We went from shop to shop looking for small crabs until finally we found them. Crabs in hand and some sandwiches we waiting our next turn. Ouch, Jongsoo lost another. Then it was again my turn the rod went click, click and no run but I picked it up and reeled in like a maniac just in case and there it was, the run!, fish went left themn middle then under the pilons of the bridge footings, I said nice and slow! This one is coming in! and sure did. I brought it in close and again we had a bit of trouble with the current so I did not want to go in between the arches. We stayed were we were and Nilson let the current take the net to the fish and was able to scoop it out.

Here is my fish.

With that burden out of my chest I was able to relax and wait for Jongsoo to take on the next bite. Anxiously waiting the weed lines kept playing tricks on us until finally one of the rods started to click louder than the others had been.  Jongsoo ran to it and was able to pick it up on time, the fish gave him a hard time and Jongsoo was able to control it. I ran with the net and again the current gave us a bit of trouble and had to let the current carry the net under the fish. The fish was landed and our goal was accomplished. Each of us landed a permit.

Here is Jongsoo and his fish.

All in all it was a windy day at the beginning and then it turned into extreme heat. The snappers came in and left as fast as they came, we got a couple of baby mutton snappers and a baby black grouper all were released. Besides the walking up and down and the heat, it was fun to be back on the bridges of the Florida Keys where class fishing awaits and as always, it’s about the fishing not the catching. It was all about the team work each of us paid attention to all the rods and screamed to whomever rod was moving. The permit were lazy at the bite, we were able to identify it but they were not lazy runners. As always they gave us hell trying to land them.Here we are with all three permit fish. As I have said it before I do not like to harvest more tan one or two permit fish a year.  I will not do this again until next year. So I can say that the permit are safe from my frying pan. 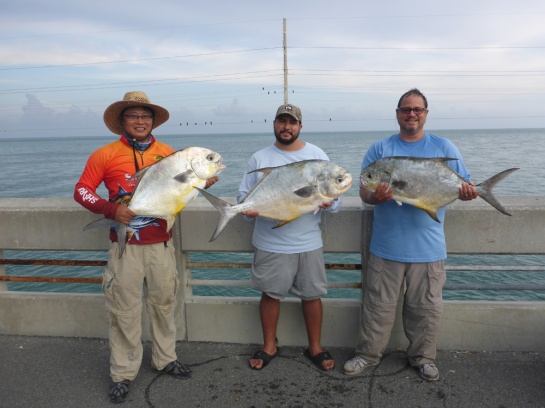 Thanks for visiting and tight lines 8)

7 thoughts on “Lazy Permit Fishing in the Florida Keys Bridges”