I shot a Permit fish in Cayman Island and did so with my under water camera. It was an awesome experience to swim right next to a school of permit out in the ocean and then add the hundreds of Blue Tang fish that let me join their feast on the corals. Let me just say the Cayman Islands are one of those places where I have been and where I always want to go back to. It is such a small place but has so much to offer. I just wish I had the money some people in this world have in the banks of this tiny beautiful island. The Cayman Islands was the last stop in our voyage, and as always we left happy and accomplished. We had decided to sleep in late as the excursion we chose was basically at noon. We saw the excursion information and fell for it at just $70:

We boarded the tender boat, we cruised right by the Holland America cruise ship, landed soon enough and on to our air conditioned ride to 7 Mile Beach. 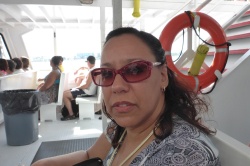 The beach as always was a nice white sand and soft to the touch. Some areas had rocks and plenty shells but there was plenty space to choose from.

One thing for sure was that if you venture pass the through and encountered rocks there would be plenty chances to step on a sea urchin. So when you go, just be very careful as there might be plenty sea urchins out there. 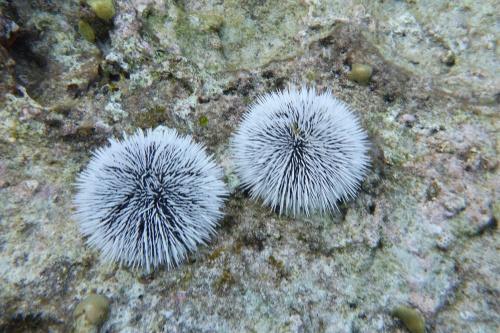 If you snorkel, make sure to peak under the rocks and you might find some snappers or schools of grunts lurking in.

Bermuda Chubs are regulars through out the Caribbean and they sure were here in large numbers.

The beach offered plenty rocks and scattered corals to be appreciated. 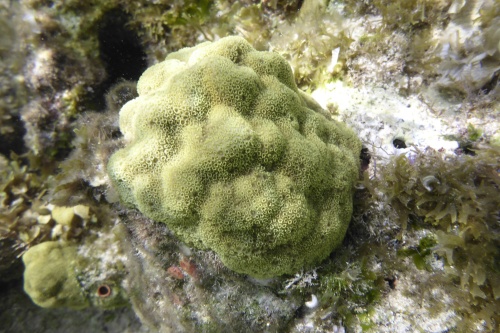 If you look well enough you will be able to see Sting Rays and some other animal life that are good at camouflaging themselves. 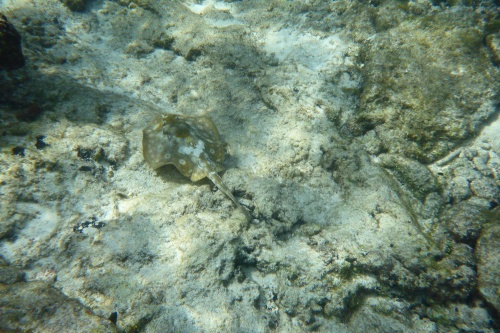 Brain Coral was scattered around and some had nice tones, some were just almost a plain beige, but still awesome to look at. 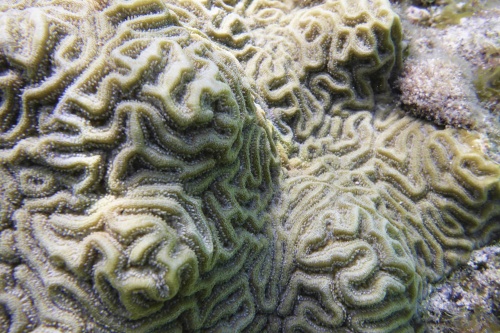 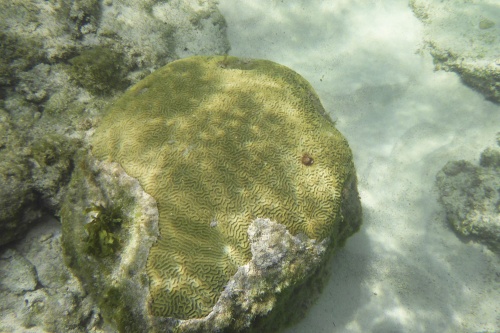 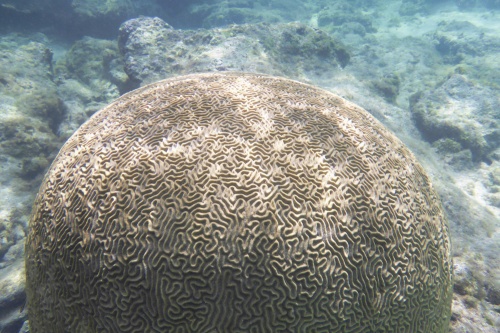 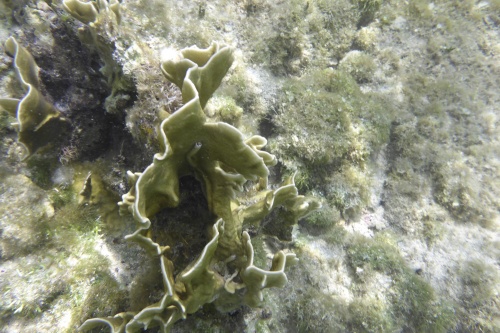 A lonely Blue Tang was just posing for a picture but did not allow me to get any closer.

A shy Squirrel fish also posed for me and vanished as soon as I took the picture.

This I guess is a Butterfly Fish that ran way from me but not before I had a chance to snap a picture of it. 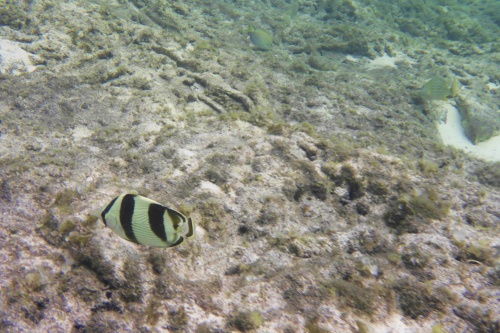 A school of grunts was hiding perfectly under the rocks. 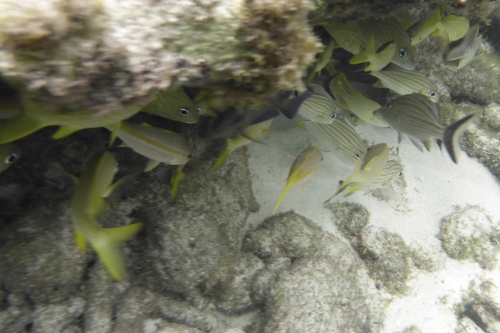 Then came my big surprise as I just passed the first set of rocks I looked under as hundreds of blue tangs and other fish schooled together to feed on the corals. It was amazing as they only took a couple of bites from one and went to the next as if they were schools of bees jumping from flower to flower. I followed them and as I spent more time with them they let me get closer. 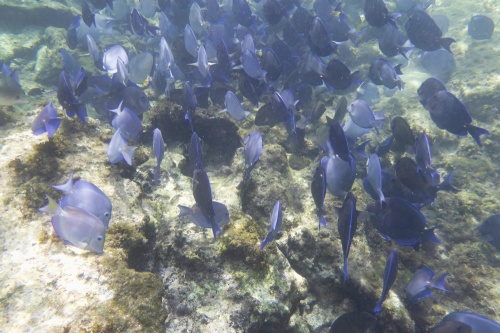 As the Tangs guided me through the reef yet another surprise came about. A small school of 4 to 5 permit were feeding on the crustaceans in the sand and rocks. I followed them and I got closer and closer without making sudden movements and it was within minutes that they were swimming around me. 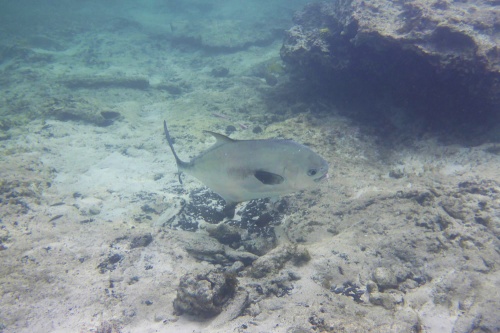 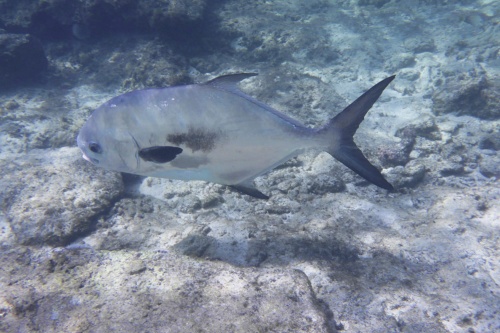 I found it curious that they would come from under me over and over, I hadn’t noticed that I flipped a Sea Urchin from under me while I tried to turn around and see what they were doing. I am always careful as to not touch the corals or even the live rocks as I do not want to crush any potential reef growth. The sea urchin must have been trying to move as it was swept by the current of my fins. The permits took advantage and had eaten it in seconds. I tried switching to video and captured a bit part of it then switched right back to picture mode.

The fish were beautiful and had their fun with me, they swam faster and left under the fins of unsuspected snorkelers that were near by. My guess is they are now familiar with people flipping Sea Urchins for them to eat. 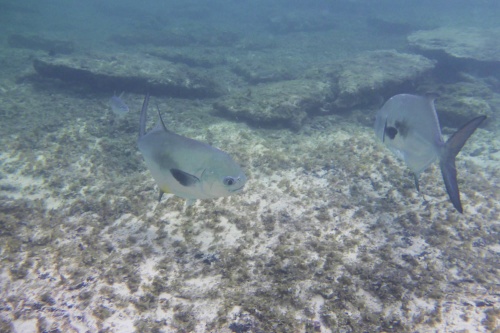 Once again, a Needle Fish said good by to me as I was leaving the water. It was time to get some Rum Punch and some food, yum yum.

Our all inclusive included Rum Punch and a BBQ lunch which we enjoyed to the fullest extent. They had good choices of meats, but we picked the usual BBQ chicken we would normally eat. 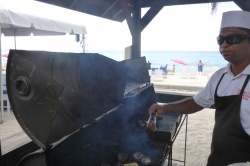 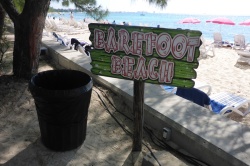 The Rum Punch was good enough to get you to smile for a while.

Once again our vacation almost felt as if it was over, we boarded the Tender Boats and on to the ship we went.

It was yet another amazing vacation. Can’t wait to see what our 30th anniversary will take us in 2016.

Thanks for reading and or looking at the pictures. Until next time!