As many people already know that after 59 pages of forum talk and over 25,000 views on the Yankee Capts thread for the 360tuna.com charter the trip was a go but as I docked from another fishing trip I learned that unfortunately the Yankee Capts boat’s generator stopped working. Captain Greg made the calls but was not able to get a replacement on time for the switch for our trip. It was unfortunate that the trip was canceled and had many running around looking for different charters as many were driving from Georgia and the New Jersey area. Then the Out Of Control from Fort Myers stepped up and allowed David to make the deposit for an unscheduled Pulley Ridge trip. Thanks to Capt Bill (hawkboat) for the phone calls to set this last minute trip.

Where do we start? It was HOT! As Captain Greg said “it’s Africa Hot”. We all had bought water and Gatorade for the trip but it was not necessary as the boat included all you wanted to drink water in the $65 meal plan. I found out too late as I had already loaded it in the boat. Well, I had forgotten that part as I had already been on that ship. Oh Well! We waited for the mates and Captain to load and ready the boat for our trip. We loaded up, we used their carts to get our 50 pound jig bags and rods. I did not take a cooler as they did not allow coolers bigger than 50 quarts in the boat. Afterwards we went to get a bite to eat at the nearby restaurant but we had to take our food to go as they took over an hour to get it ready. It was now almost 9 pm when we left the dock for our 12 hour journey to Pulley Ridge.

It was about 10 am according to the time in my pictures that we started fishing in the 200 foot marks and were not lucky to find the fish, the Captain kept moving the boat over and over looking for the ones that wanted to bite in the 0 knot current and 0.1 knot wind if that much! That did not help with finding the hungry fish. The boat just wouldn’t move. Then the Captain decided to move the boat as we went for deeper and deeper waters plus a Westerly route. 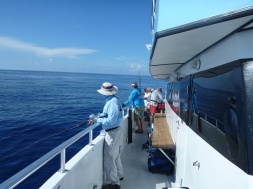 In between the moves some people like Q were trolling,  they hooked up a few times but the fish came off the hook that many times as well. No fish hit the decks on the troll this day.

It was almost noon when the first few fish decided to start chewing in about 300 feet of water. We were jigging pure metal but a couple of people were using electric reels with bait and were the first ones to hook up (David and Q). I hooked my first on the jig and so did Bill, Garriga, and Jay plus many others as the day went through.

The day went by and not many fish were landed. We were all worried that we were going to be skunked. It was not the jigging with pure metal that did it as some had tried with cut baits and live pinfish. Then at around 4 pm things started to sporadically pick up and we started catching some fish again. 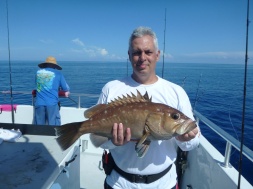 By 11 pm Garriga hooked up with a horse eye jack on a jig. My self, Jay and him kept going back and forth on the jigging and tipping jigs with bait.  It was past midnight and after one mutton snapper caught we were all waiting for the blackfin tunas to appear. At about two am I took a nap and when I woke up, Jay told me that young Dennis had caught a wahoo on a live flyer. I went to look at the first fish box and found it decently full. 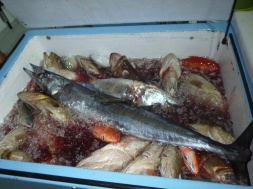 At morning time the Captain took us to deeper water but our luck was going in the same direction as the previous day. Gilbert and I spoke to David and suggested that we should just go to the deep wrecks or the Towers in the Ft. Myers area. David gave it a thought and ran it by the Captain. The decision was made to give it a few tries in deeper waters and then we would move to the wrecks. The Captain move the boat to 500 feet and told us that the fish were about 30 feet from the bottom. The Captain was good at letting us know at what dept the fish were so we were able to efficiently target them. By this time the current had picked up just a bit to about .4 knots if I remember correctly plus we had a small breeze that made it feel more comfortable. 9:30 am HALELUYA!!! QUEEN SNAPPERS!!! Yes, the queens started biting and the the yellow edge groupers did as well!

Jay with a supper double. A yellow edge grouper and a queen snapper on the Dennis Cluster Phuck Rig.

Me with a queen and Garriga with a yellow edge grouper.

David with a double.

Bill and his Queen. 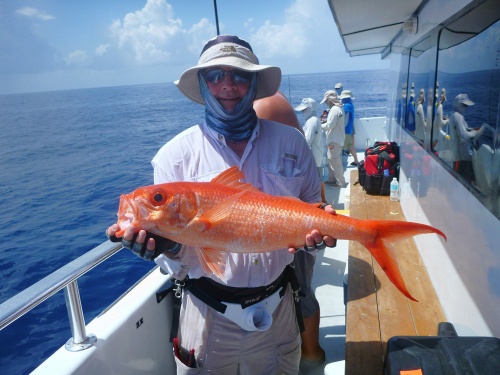 Jay and what I think was the heaviest fish of the trip. 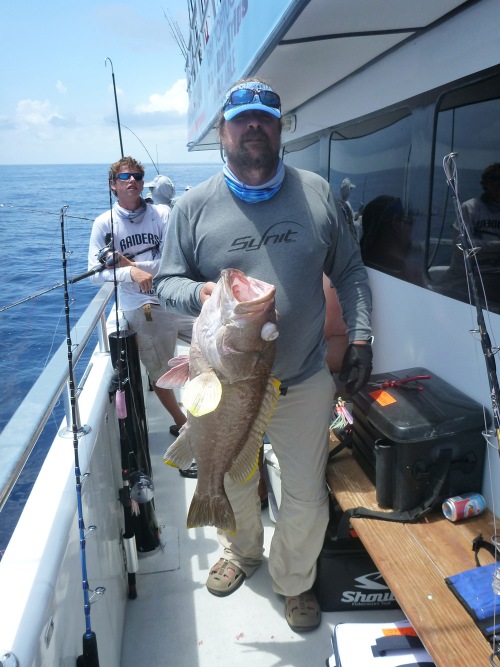 Chichi landed a hell of a Queen Snapper. 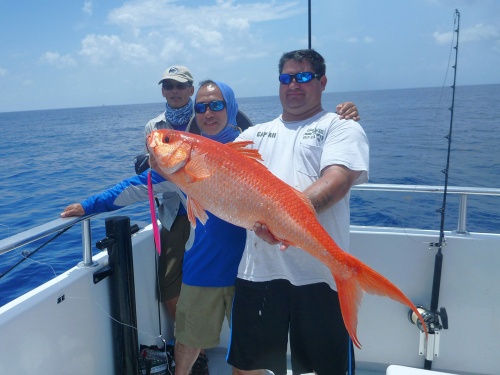 That bite lasted until about 1:30 pm. Then it was move and move until the captain decided to go to the wrecks just outside Pulley Ridge. This is where Dennis landed a nice red grouper on a jig. Picture below.

Then it was AJ and Almaco madness as everyone got hooked up and as many almacos were gaffed some AJ’s were sent back into the water with injuries. Some were attacked by the barracudas as if attached by piranhas. Below is Chichi and crew hooked up.

Below is Bill hooked up.

Below is Garriga and his AJ that was released.

That was to be be the last few fish that jumped into the coolers. By now we were satisfied customers as we found some quality fish in the slow picking of the days of fishing. Then again it is called fishing not catching. I checked the live wells and saw just as many pinfish made the journey back with us. All the rods were packed away on the top deck and off to bed we all went. 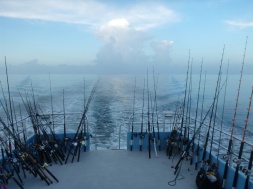 The next morning we woke up to eat breakfast and pack our items to get ready to dock.

Back at the dock.

The group Picture and our catch.

Davis with his catch.

Chichi and his group with their catch.

All in all the trip had an extremely slow start but gradually got better and better. The Captain was great as always and the crew worked very hard to get all the fish and tangles as fast as they could in that extreme heat. A special thanks to the Co-Captain Dennis who was also our chef cooking all the meals. He catered to everyone’s needs for the food. This trip was basically an exploration trip for the Out Of Control IV group. They have now found the fish so their next trip should start with a strong bite.

A big thanks to the http://www.JiggingWorld.com crew for sponsoring the trip with their donations.

Update: This boat is no longer on the West Coast of Florida. I was renamed to Super Sealegs and now operates from the East Coast.

6 thoughts on “Out Of Control IV Pulley Ridge- 360Tuna Jig and Crank!”