Prolog:
Hi all, it’s been a while since I’ve written a fishing report but here I am giving it a try. I apologize in advance if the story line is not in the order in which the events took place. I went to fish and not to document the catches. So here it goes:
I was supposed to go fishing to the Bahamas in May but changes in my schedule forced me to cancel, but I had the itch for some jigging fun and catching something that could bring some pain to my shoulders, arms or my back. Well, I guess I am trying to say I needed some stress release so I booked a newly opened trip on the Yankee Capts “A WRECKS TRIP” OH boy, this sounded great for the stress release situation. A chance to really work some flutter and vertical jigs on some AJ’s and hopefully some grouper or snappers to gain some “PAIN” and get the stress out of my mind!

CRAP! We ain’t fishing in the Tugas? Somebody brought bananas?

OOOPS! I guess I did not read on the trip well enough. We were to fish wrecks in the gulf, wayyyyyyy up from the Tugas! When I found out I re read In my mind I thought “hmmmmmmm, king fish, cudas, lots of groupers, AJ’s, maybe some cobes, and a chance for permit in the wrecks”. Again I have a busy schedule so I had a very short window to really prepare since my rule to fish from a boat is “as much fresh bait as possible” and by that I mean the bait cannot be caught more than 3 days before the trip and the countdown first day starts at night. I started checking my goggle eye spot sources and those did not look promising, but then I thought I am looking for pain so I need to gather bait for the bait to target bait to catch pain species (In case you did not understand what I meant is that I was looking for bait to get legal size bait to catch big fish with shoulder and back wrecking strength). OK, so that meant bait like pilchards, threadfin herrings, small pin fish, blue runners, etc…. Well things started bad as planning had to go down the drain since we weren’t going to the Tugas, and to top it off someone (cough, cough) brought bananas in the boat?

Chapter 2
Preparation.
I am used to fishing by myself or a few friends form bridges, jetties, or beaches “I’m a BOATLESS individual” so I pack HEAVY! We have lots of space to run for the rod that gets the hit, this did not make it difficult to choose the basic needs to get the basic pain I wanted.
1- A spinning rod to jig with guts to get something away from the wrecks, a reel with enough drag and line to pull anything that could inflict pain
2- A spinning rod for bait that could be possibly used to get a 30 pound king fish in the boat
3- A conventional rod and reel to get nice legal size baits ( in the pound range)
4- A conventional rod and reel to get the big pain givers at sunrise and sunset
5- A conventional rod that could be used as a back up for 3 and 4 above
The above is my own list for a limited fishing trip (limited amount of fisher men or women on a single long range trip)

On the 7th of April It all started bad, I was supposed to go to a bridge that holds cigar minnows, small goggle eyes, (especially since I had to be at the dock in Stockton Island before 10 pm on Thursday). I started the day with the OHHHH boy I ain’t got bait in my coolers! I am lucky enough that I live close to the keys so I went straight to the Yellow bait house in Key Largo and haggled on some goggle eyes ( I know I said I may not need them but you never know what bait is the preferred bait of the day so I got them), and got some live shrimp (did not keep live, just placed in bag in the cooler). I went to the first bridge to get herrings and whatever else I could, I saw Jarvis and his friends said high to them as they left and I continued getting bait. I jumped to a second bridge to cast net some ballyhoos after a few one by one tries I went to the third bridge where most of the people fishing in the trip where there. Got the pins and separated them by size in zipper bags, small medium, large, and mixed bag (different baits).

On the 8th of April after a loooooooong ride to the first wreck right before sunrise we all tried for some groupers and then did the switch to other baits and styles of fishing. You could see knocker rigs, fish finder rigs, free lining, heavy bottom weights, and light weights. My observation was that all in all everybody was trying something different and everybody was watching each other to see what worked at the moment as if we were on a pier where someone gets a fish to bite and all of a sudden you see 10 other fishermen in the same spot. Them not knowing that the fish are all over but it’s up to them to get them to bite where they are.
I and a few people got what we wanted, nice fish. And I definitely got what I wanted, PAIN! I started jigging and got on to some AJ’s while everyone else tried hard to get other fish. After my Aj’s a few African Pompanos came up, we got a few very rare Red Americans( cough, cough) and that was promising. As always the captains and crew worked hard and moved from spot to spot trying to make sure that all got into some “QUALITY FISH”. Yes, this trip was not meant to be about numbers or just Muttons, but about quality in size of fish that inhabit the wrecks.
I kept saying I am going to battle with the AJ’s, and so I did. I got 12 out of about 20. My shoulders were hurting, my back was in pain, my arms had a great work out, ended up got bruises all over, and ended up keeping the smaller ones to eat. The night came and so we started targeting snappers and groupers, to our surprise a ballyhoo going down produced a nice black fin (sorry I am bad with remembering names)…. So I tried jigging at night with no success, I went back to bottom fishing.
On the 9th (or my birthday) fishing was going very slow so I decided to break my rules and target the yellow tails using a guppy rig ( chicken rig) I know it sounds bad but I did it and I said it “aint no shame in this game, fish don’t know the difference! I went with the smorgasbord buffet special baits, LOL…A big mixed bait on the top, a smaller mixed bait on the middle, and a tiny single bait on the bottom… I dropped it and then POW!!! Rod tip bent, tangle with 3 people is on, I kept on reeling in, captain Greg ran to the bow to help, and Jarvis started s creaming don’t pull he’s got a big tail on… A nice tail comes up I say it’s a flag but Mr. Caesar says “NO!, is not a flag, IT’S A BANNER!”….Thanks goes to Jarvis and Capt Greg for the help on landing the nice y-tail. It was 26.5” total length as the picture shows it and may be even more if I had pinched the tail some more…. Instead of shrinking this thing grew from 24.5” inches to a nice 26.5”. After that a nice 15 or so pound red was landed and a real NICE 24 pounder mutton was landed as well. The day kept going with the moving from spot to spot. Others were having fun with jigging and on the same day Roberto was able to sneak the jig in between all the Aj’s and got a nice 25 pound or so black fin. After that a nice surprise came in the form of a cubera snapper, the Yankee fan was able to pull the pool winner 37 pounder, which rumors had it was around 50 pounds but that later was confirmed to be 37 pounds on the scale. A one of a kind for many, but just smaller one for the person that caught it ( he got a bigger one in Panama), but HEY!, this one was in Florida during our trip!
On the 1oth, things kept going slow with blue fish and lanes in the mix and finally Capt Matt decided to make a last minute move to arrive at sunrise city where we prepared for groupers and got hit hard, rods bent all over and a few Goliaths came over the rail but no reds or blacks, then all of a sudden the nice size mangrove snapper started to show until Mr. Sharky showed up and capt Greg gave us the last call for the trip.

The bananas in the boat had to be eaten before we all started catching some fish. All in all fishing was slow for those that did not want to fish, we got nice quality fish, and we had a great time. The Captains did their job so did the mates and it was up to us to get the fish. We all did what we could and some of us landed something very nice. Numbers didn’t matter, quality did. The trip was fun and smelly because (cough, cough)” middle bunks situation” with someone bringing bait in their clothes and leaving it somewhere in there. I ended up taking lots of bait but ended using mostly artificials, (it’s what I asked for, “PAIN”). I did not fish for cudas as it was just to easy to do so, they were all over and a tube lure would have been just too easy. 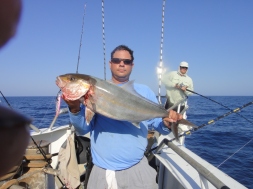 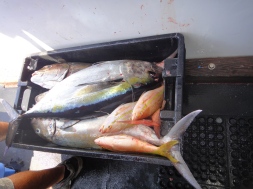 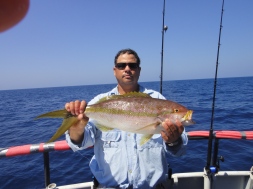 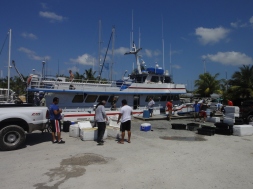 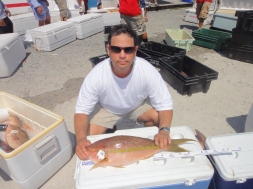