THE FISHING TRIP: Jetty Snook Fishing
Aboard no boat this was a shore bound trip

I wanted to squeeze some fishing this weekend and decided to make it count so I wanted to go to Juno Pier for some snook catch and release. Rory an old fishing friend told me that the fish were not close to the beach the day before and that the inlet had been better so my wife and I decided to go to the Jupiter South Jetty. The plan was to leave at midnight for our 3 hour drive and get to Blue Heron Bridge for some bait catching and then to Loxahatchee river for some mullet. Blue heron only had small pilchards, spanish sardines, and tiny threadfin herring. Well sometimes you have to get what nature offers and so we went to the river but not a ripple in the water so no mullet to be caught. Oh well I had to go with plans of only using crabs and what ever bait I could get my hands on. I got there around 4 a.m and were greeted by some guys that were taking super morning swims and drinking a few beers. They told us “man, there ain’t nothing out there but catfish people have been using shrimp and only catching catfish and anyways the waves are coming over the jetty, almost all of it”. I thanked them for their advise and continued to unload and on our way we were. The entire jetty was wet, perhaps the rain clouds blew some heavy wind and did have a few waves come over the jetty, but that had gone past. We set up and out the crabs went. I looked for left over shrimp and clams and found a few, so I tried to secure bait with that. Around 6 a.m. came the first hit, I was hoping for a permit since it hit a crab but instead it was an almost blind pissed off snook that gave me a nice little encouraging fight. Later on a fisherman arrived at the jetty and setup camp under my rods that were on my fishing cart and lines were in the water. I paid no attention as he started to cast in between my lines, he got a nice pompano and so I thought the day would be better than expected. Then came the rest of regulars whom also setup camp under my lines. I paid no mind they were avid at casting and positioning the lines accordingly to not intrude my lines that were in the water, but looks like the first guy kind of got offended that the others setup camp right next to him and so he moved. Well,  after that pompano out came a whole bunch of palometas, mojarras, and croackers. I checked my lines and recasted or placed a new crab on my hooks. Waited and waited and BARABAMMMM!!!!! My rod is bent like it was elastic, I picked it up and had a nice fight that took me to carefully hopping on the rocks and after gaining line loosing line gaining line I was finally able to see what it was, a nice size permit. I was relieved to see it floating upside down a sign that the fight was over and then PLUP! WTF HAPPNED? I see the fish floating away with the tide. I reel in my line and what do I see? Another case of a broken hook! Yeap! Another broken hook loosing a nice fish. Kicked my self for not getting rid of those darn hooks and I swear they will be gone this week. No more cheap hooks. I had thrown away many of them but kept a few, no more. They are going in the garbage, no more fleabay hooks! Only from known sources from now on. After that we took an opportunity for a nice sunrise photo opt. 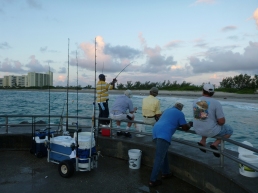 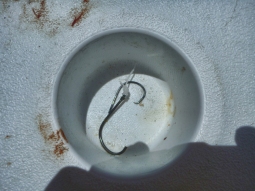 As the morning came to light the Charter and party boats pass by the inlet on their way to a rough day of fishing. 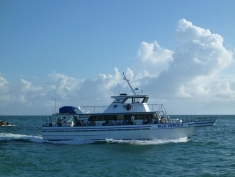 I lost two snooks to the rocks so I upped my leader to 60 pound test, that seemed to do the trick as I did not loose any more to the rocks. So off a big fellow went out to fetch me a another snook. 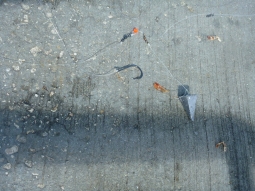 That big fellow swam for two hours until it got hit but the snook were just playing with it it, they would pick it up and would drop it. So out a smaller croacker went to the water, this time at 9 a.m. it got swallowed by a snook. Thanks to a kind kid that came to me and said “here mister,  catch a big snook”

Ten Minutes had passed and my rod bends again, another nice snook, as my wife went to get my casting net I caught and released two more snooks.

Then the rest of people decided to join the fun, Fausto a nice gentleman that gave me a few croackers he caught with a cast net also joined and got a few nice snooks

At 10:05 a.m came up another one of my snooks, got some pics since my wife came back and released it was. 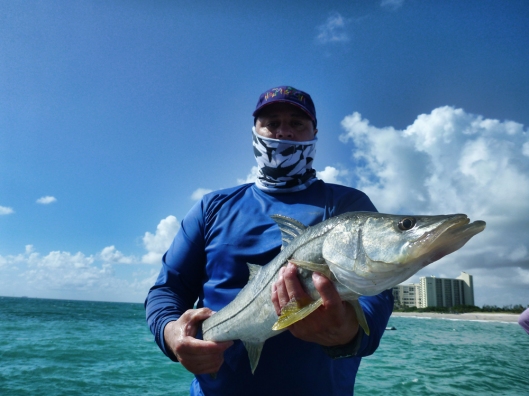 At 10:26 Fausto got another one along with a crowd rant for holding the snook the way he did, but he released it quickly.

I kept on hooking up and releasing more then Rory passed by to say high and toss a few lures in the water. I had ran out of bait so I asked Fausto once again for a small croacker as I sent the dead croacker others were instantly hooking up with live ones. I knew I had to wait and just twich the rod every now and then to make it look somewhat live and at 10:30 a.m  out a beauty of a snook momma just made me dance hoping from rock to rock like a teenager skipping stones, she came close to a nice gap of rocks and then she would just go out again, doing so 3 or 4 times but she gave up and decided it was time to come up. As I was picking her up and unhooking her she slipped out of my hands and fell in the water but between rocks and she could not get out so I had to hop to the rocks down below to retrieve her, my wife took a quick picture from far away and off to the water momma snook went. She swam so fast that as soon as she hit the water there was no sign of her. 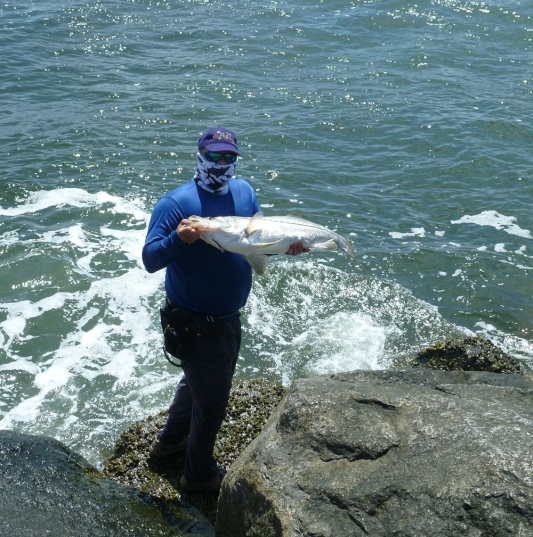 It was a great day of catch and release (except the bait off course) at the Jupiter Inlet South Jetty (AKA Juno Inlet Jetty). My fingers are torn to pieces literally and my whole body hurts like I have been to the gym for hours on end. Those rocks sure made me pay a toll for not being young or better said way out of shape, but I say it again “I will start on Monday”. It was nice to see and chat with Rory, hope he makes it out again  to have some fun fishing.