Weather had been fair all week but as we were to embark on our 10 hour fishing trip all was to change,a warm morning became windy with a cold breeze, we were hopping the fish would still bite, we had many good expectations on this trip for the grouper opener. We began by catching pinfish for bait, a great bait for groupers, snappers, and many other species. 6 people alternating on sabikis yielded about 100 baits plus the boat had another 20 to 30 baits. This was more than enough since many would only do vertical jigging.

On our first drop there were no bites, Captain Chris readjusted the boat and all of a sudden someone fishing with a live pinfish at the bow has a tight line and a bent rod, he was using an old Penn 6/0 with 80 lb line and fishing next to an individual with a high End Shimano Tiagra 3o 0r 50 (I did not confirm). The end result was a 10 to 12 lb Gag Grouper. To cut it short this was the last fish to be caught for hours as the weather took a turn with winds switching to North and the current on the opposite end and then switching to Northeast. Here is the weather synopsis

“Surface high pressure will build into the area from the Gulf of Mexico behind a departed cold front leading to tranquil weather conditions. The high will gradually shift into the western Atlantic through the week. This will result in a northeast wind flow becoming easterly by mid week.”

The sudden weather change affected fishing and how the Captain would position the boat and as we were over a wreck our vertical jigs went horizontal due to 20 knot winds pushing the boat very fast past the wrecks. The Captain the decided call for a vote he asked us if we wanted to continue trying over the wrecks or go anchor in shallower water. Final decision was to fish shallower and anchor in 120 feet deep waters, but the same was to be had strong currents. Again the captain moved the boat to about 60 feet deep and this time the current was better. A chum line was started to attract snappers, groupers, and any other species that might hit a jig or a bait. A first hook up was had on 12 pound test and a jighead tipped with bonito, we never got to see the fish after a few minutes battle. As we were cvatching a few ballyhoos all hell broke loose with baitfish boiling the waters so the Captain Un anchored and we set after the boils casting everything we had at hand. The first hookup was Garriga on a verical jig, the my son, end result was about 4 to 5 bonitos landed some released some kept for bait on a later day. We continued following the school hoping to hook on watever was feeding on the little tunny (bonito). My son had a strong hook up the made him fight the fish from the transom to the bow, as otheres were still on the bonitos he was still fighting what ended being a nice size jack crevalle. Unfortunately I did not take many pictures, but here are the ones I took. 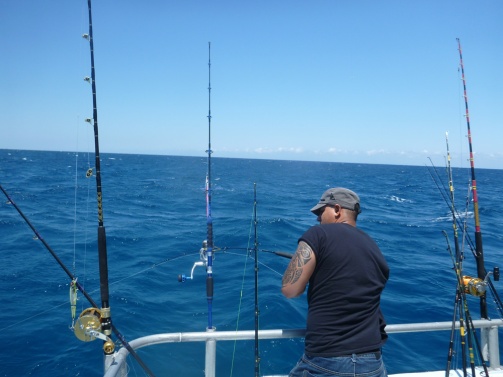 Here is the end summary of my fishing report:

THE FISHING TRIP: Super Grouper 10 Hour Fishing Trip
Aboard the “Reward Won” with Captain Chris of the Reward Fishing Fleet
The Spot : Around 5 to 8 miles off Key Biscayne, FL
Weather Forecast: Sunny 20% chance of rain, Saturday Easterly winds 9 to 14 knots then up to 20 knots. Seas 2 to 4 feet with occasional seas to 5 feet. The real weather was: Earlier seas 2 to 3 feet in the morning and 3 to 5 later in the day with occasional 6 foot rolling waves, cloudy skies in the morning then clear skies in the afternoon and no rain all day.
Water: Calm at in the morning then choppy and strong current later in the morning and stronger in the afternoon.
Fish catches: Several bonitos, one Gag Grouper, one porgie, one small almaco jack, and one Jack Crevalle.
Biggest size Type : Jack Crevalle estimated at around 15 pounds
Techniques : Vertical Jigging, dead bait, live bait
Jigs : 80 to 300 grams all colors were working on the bonitos.