Gruntking did it again, he put together another http://www.boatlessfishing.com outing and this time it was a fishing one. The agreement came at the BBQ a few months ago. Many of us offered to go and show a few things to people that wanted to learn. If you didn’t go you missed out. Some members of the forum like Grunking Joe, PhishingPhanatic Rory, rare Nilson, Striz Ron, Greentide John, Myles, and many others fished hard core from Thursday till Sunday and some until Monday. My son and I were there only from late Friday night and till noon on Saturday since I had a fishing trip the next day but it was enough time to get my limit on Mangrove snappers and lost a Permit to the water pipes. I did release all snappers under 12″ and kept only 2 over 13″. The highlight of the day was a nice 12.5 pound Mutton Snapper by a member by the name of Myles. Wish I could have taken more pictures of the fishing and all the fish caught but there were over 70 fishing rods and too many people working all the areas of the bridge to do so. So here are the few pictures I took.

The lamp went down around 1 am to get sardines and thread fin herring wich arrived in small numbers at around 2 am.

Here is Nilson getting the bait on sabikis at night 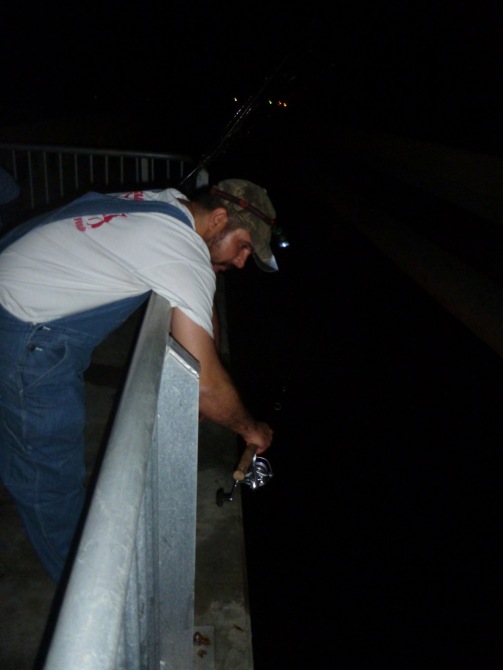 The amazing sun came up over the Florida Keys

We all woke up and started to get ready to fish. I know some took some good knowledge from this outing.

Here is the Gruntking with a barracuda he snatched (used a trebel hook with heavy sinker under it, threw it over the barracuda and snatched it. It is a common practice amongst people wanting to get shark bait and not have to use artificial or live bait. It is not as easy as it sounds you still have to know what to do and how to do it.

Here is one of the mangrove snappers on a jig head with shrimp. 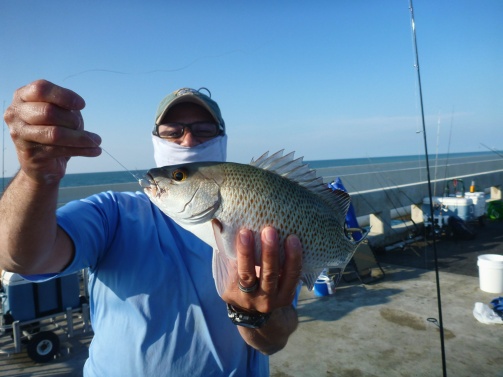 Here is John with a gift from a Fishing Guide that was fishing under the bridge.

Here is my son with his grouper caught on a live pinfish with a circle hook. Fish was released.

In the end many fish were caught including more mutton snappers, yellow jacks and other species. It was a great day to be out there, and was fun talking to many and helping a couple of people understanding how to fish in the bridges.