Since the last trip we decided to fish more often and what day to start doing so better than on Man’s Day? So it was decided, we are men and we go fishing on this Man’s day. And what more manly thing to do than for all of us to ask our wives for permission? Permission was granted to us men and the trip was on, LOL. I had to prepare my rods, check and make sure all were sprayed with a non odor, environmentally friendly petroleum based line, lure, reel, and rod protector solvent. Why do I do this? Well, it protects my stuff from the sun and salt water deposits and it does make the braid lines and mono filament lines exit the the reel smoother and faster. Yes, that stuff really works. This is not a commercial, I haven’t mentioned brands. All my rods, reels, lines, and metal jigs were sprayed. All reels were checked for loose screws and drags were set at 15 and 9 pounds respectively. I minimized my selection of jigs to a couple dozen. six 250 grams, six 150 grams, and the rest were 100 grams and under. I took one kingfish mackerel rod, a seven foot spinning rod with 30 pound test braid line and a little reel that is supposed to have 32 pounds of drag. Also with me were a 250 gram jigging rod with a Stella 8000PG and color coded PE8 line, a 200 gram jigging rod with a Saragossa 10000 and 50 lb test white braid , and a 150 gram jigging rod with 40lb test green braid that could double as a bottom rod. Enough of the talk about gear here is the report:

We waited and waited so I started to take some pics of the seagulls that were taking a sip of the available fresh water.

We got a call from the captain and finally the engines were working and so they came around 9:45 a.m. and we boarded the boat. 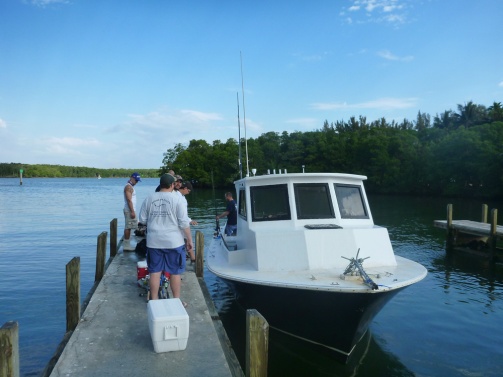 As we loaded we started setting up the gear.

As we got on the way we decided to pass by Lester’s Live Bait boat that basically anchors on the inlet waiting for people to pass by buying some live bait he sells it at $20 for a 5 gallon bucket full of white baits.Not bad considering that you don’t waist time looking for live bait. Live bait and so pirate Nilson was now happy and we got on the way to fishing. 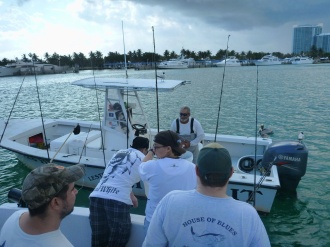 We passes by the Balharbour jetty so I snapped a few pictures. Word was they were catching pompanos. 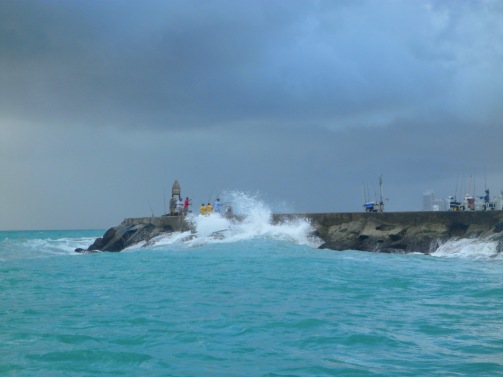 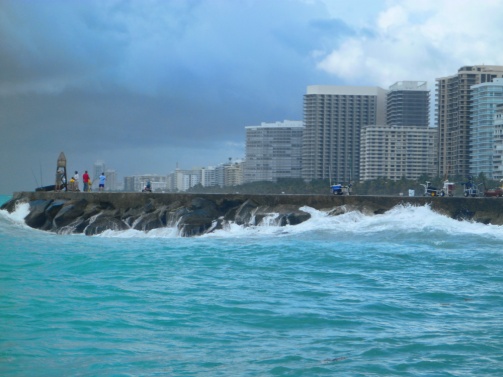 On the way out we saw the Hurricane (from the Kelley Fishing Fleet) fishing in about 50 feet of water which was not a good sign for us.

The plan was to go jigging in 350 feet of water but the captain did not want to because of the waves, there were one too many small storms making it difficult to maneuver and so he asked us if we wanted to go catch Lane Snappers and then try the vertical jigging. So we said what the hey let’s do it. On the way we saw some dolphins (Mahi Mahi) jump and asked the Captain to give us a shot and so he did but not for long. One of the engines was having trouble and kept shutting off. When we got to the Lane Snapper spot out went the chicken rigs and a few Lane Snappers came in the boat. I did not catch a single fish, oh well. We then decided to go trolling and that did not work out. Then the captain offered for us to drift with our live baits and as we did i threw out a few as chum but that did not work either. We gave it one more shot at Vertical jigging but the winds around the storms made the boat advance way too fast over the only wreck the Captain seemed to have on his numbers.

In the end the total catch was placed in a small cooler. Sad day of fishing for us so we decided to end the trip early and only do half a day.

On the way back we saw a few people fishing in Haulover under the bridge, unfortunately if this fisherman would catch a fish he would loose it since he is using the reel backwards. We got back to the dock and were disappointed on the bad day of fishing, but that is how it goes. We call it “Fishing” not “Catching”. If you are interested the Katchmore Luhrs is for sale at $20,000 U.S. Dollars. The boat is really nice for fishing but needs some work, I think it is a bargain at that price.

THE FISHING TRIP: Key West Crew get together for Man’s day
Aboard the “Katchmore” with Captain
The Spot : Haulover, FL
Weather Forecast: Sunny 20% chance of rain, Saturday East southeast winds 9 to 14 knots. Seas 2 to 4 feet with occasional seas to 5 feet. The real weather was: Seas 4 to 6 feet with occasional 8 foot rolling waves, cloudy and scattered rain all day.
Water: Choppy up to 8 foot seas and strong currents all day.
Fish catches: Lane snappers and one blue runner
Biggest size Type : A blue runners was bigger than the snappers caught, LOL
Techniques : Vertical Jigging, dead bait, live bait
Jigs : 80 to 300 gram,  butterfly jigs, no jigs worked. The current did not allow for the jigging.

2 thoughts on “Man Day Fishing Trip on the Katchmore – A jigging trip?”