What a beautiful view we were greeted by in the morning we arrived. We had purchased a “Tiki Hut Relax & Snorkel”, adventure from the ship. It was set to leave at noon but since the ship got there at 7 am we decided to explore the shops and walked around. We saw the bicycles at the roundabout but no one was there to answer questions on renting the bicycles. We asked and we asked and were pointed in all directions but did not find a single person that could answer our questions and so we just walked and took pictures here and there. We got a bit bore so we got a map of the island sat down and waited for the first Tiki Excursion to arrive, hmm, no one was passing by with a sign that said Tiki Hut & Snorkel so we went back to our cabin got a few more things and got ready for the 11’ o’ clock excursion. We went down aand were told they wouldn’t leave until 12pm, but we decided to wait anyways. As we were waiting a lady came by and strapped the sign to a pole and told us she would be back at 12 p.m. and at around 10:45 a.m she comes back and we realized that at the dock they were all working on island time! Oh wow! Well, atleast we did not have to wait for another hour. Off we went to the Water Taxi that was to take us to the Tiki and to our surprise we had to wait on another group from another ship. This was now a recurring theme of bad luck in Sint Maarten. Finally!!!! We were on the way as the captain told us a few safety things about the craft and told us we were going to take 8 minutes to the Tiki and not the 20 minutes we were told. Seas were a bit rough and wind was about 25 knots, the water looked very sandy in color not a good thing to look at when all you want to do is snorkeling. The lady said it was about 12 foot visibility and they normally get 30 feet visibility at the Tiki. We arrived! First impressions were not so great, the place looked on the small side and a bit crowded, but as we boarded others left of the water taxi making lots of room for us. We were given a small safety course about the sea urching and the fire coral on the ropes and rocks, a small explanation of the area was given letting us know where the sunken sailboat, sunken helicopter, and sunken cannons where. 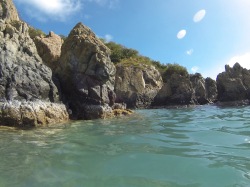 I started snorkeling and was plagued with bad luck because visibly was only about three feet and so if I wanted to see anything I had to free dive to it and so I did. I then went closer to the cliff and the snorkeled around the rocks, there was some visible sea life and saw dozens of black sea urchins. As the included rum punch and the hours went by I went back in and this time visibility was better, I could actually see the sunken sailboat from our chair. My wife got me a piece of bread and another rum punch as I prepared to go back in. The bread attracted dozens of black and yellow Sargent majors, a few yellow tail snappers one of which seemed to have escaped the hook of a fisherman and it had a huge gash that did not allow it to swim upright, but it did not stop it from getting some free bread. I took a small video of it, hope you all can see it when the video is ready. I then took the bread to a rock that was submerged about 2 feet from the top of the water and went down to about 15 feet. I scattered the bread to bring some of the sea life to the camera and then free dove to the bottom with the bread scattering it towards the top bringing in some more yellow tail snappers and this time some bar jacks with it. There was not much sea life but was glad to see some brain coral, some horned corals, perhaps some black coral, and other types growing on the rocks it seemed like a new beginning in sea life around the rocks a good sign of health in the ocean. 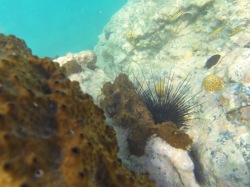 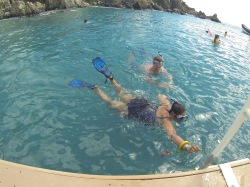 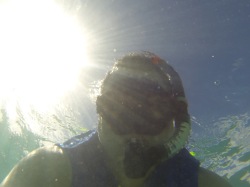 Below are the sunken sailboat, cannon, and helicopter. There are more sunken items but were not visible to to water clarity.

After a while I decide to just lounge on a chair and eat a nice grouper sandwich with my wife and of course some more of the included rum punch that had many people happy and jumping off the platform doing belly flops and cannon balls into the ocean. I just had to do it too and my wife joined as well, then a lady a former Diving Team of some place showed off her skills with a triple vault that left every jaw on the platform and no one dared to jump again or maybe their bellies were just hurting.

Time to go! We washed off the salt with the fresh water wash-down they had and changed in the bathroom. Up the water taxi came and off we went. We asked him to take us to downtown, but he said it was too late since he had to go back every half hour to the docks. Oh well another piece of luck that runs out for us. We got to the dock and decided to walk to downtown ourselves; it only took us 10 minutes by foot. We got there and got a few refreshments, walked around a bit and checked out the beach which was nice and had sailboats and other boats anchored within 20 or 30 feet from it. We took some snap shots of Petersburg ate a roti and went back very tired to the ship. As we got to the ship we took a shower changed our clothes and woke up the next day in St. Thomas. OOPS!