THE FISHING TRIP: DECEMBER 10TH, 2011
Aboard the “REWARD WON” with Captain Wayne

Water: Clear in the morning and cloudy with sand mix noticeable later in the afternoon

We had a group of people interested in jigging and planned a trip to just go out and jig with artificials with Captain Wayne of the Reward Fleet. It took almost a whole moth of waiting for the weather to give us a chance to go out and fish. It was worth the wait. The trip was a success! So we decided that we have to do this again. I had tons of fun and the fish were a plus. There were not extreme amounts caught but we managed some quality fish. I tried doing some popping got some followers but no takers.  Popping for inshore fish is no problem, but offshore here in Miami you hardly see anyone doing it. So I will keep on (gotten some bonitos popping but those don’t count in my book). Here are some pictures and a video. Hope you enjoy. 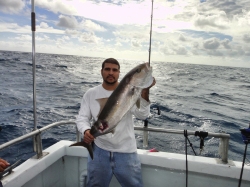 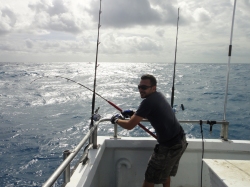